If God had a name, what would it be
And would you call it to His face?

These lines from Joan Osborne’s song “One of Us” has always made me think, “How many people are not aware that God has indeed a name?” I was born and raised in a Christian family where Bible study is part of our weekly activity, a thing we call family worship (no, we don’t worship the family, rather we gather as a family and study the Bible or any Bible-related material). We were raised to know and love Jesus Christ and the One who sent him so he can offer his ransom sacrifice and save us from the bondage of sin.

This article will answer the question “Does God have a name, and if so, why do we not know it?” “Is God’s name in the Bible, if so, why can’t we read it?”

Does God Have a Name?

The account of Jesus’s ministry clearly tells us that God has a name. Consider the following scriptures below:

“‘Father, glorify your name.’ In response, God spoke from heaven, saying: ‘I both glorified it and will glorify it again.’” —John 12:28

“I have made your name manifest to the men you gave me out of the world. They were yours, and you gave them to me, and they have observed your word.” — John 17:6

“And I have made your name known to them and will make it known, in order that the love with which you loved me may be in them and I in union with them.” —John 17:26

In these verses, Jesus stressed that his ministry were done “in the name” of his father. Then, what is God’s name and why did not Jesus used it instead of only saying “father”?

The first part of the Bible was written not in English but in Hebrew, a language that is read from right to left. In that language, the divine name appears as four consonants, יהוה. Those four Hebrew characters—transliterated YHWH—are known as the Tetragrammaton. 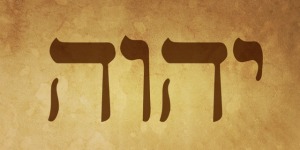 Many translations of the Bible contain God’s personal name at Exodus 6:3. That passage says: “I used to appear to Abraham, Isaac and Jacob as God Almighty, but as respects my name Jehovah I did not make myself known to them.” Jehovah is a rendering of God’s name in English that has been used for centuries. While many scholars prefer the spelling “Yahweh,” Jehovah is the form of the name that is most widely recognized.

Now, why did Jesus not address his father directly using his name? Let us put it this way, do we call out father with their first names when we talk to them or address them? Isn’t that too casual? I never called my father using his first name in my entire life. Jesus’s use of the word father to address the Almighty God is a sign of their respectful and intimate relationship. Just as to us and our fathers.

Is God’s Name in the Bible?

There seem to be two main reasons. First, many claim that the name should not be used because the original way to pronounce it is unknown today. Ancient Hebrew was written without vowels. Therefore, no one today can say for sure exactly how people of Bible times pronounced YHWH. However, should this prevent us from using God’s name? In Bible times, the name Jesus may have been pronounced Yeshua or possibly Yehoshua—no one can say for certain. Yet, people the world over today use different forms of the name Jesus, pronouncing it in the way that is common in their language. They do not hesitate to use the name just because they do not know its first-century pronunciation. Similarly, if you were to travel to a foreign land, you might well find that your own name sounds quite different in another tongue. Hence, uncertainty about the ancient pronunciation of God’s name is no reason for not using it.

A second reason often given for omitting God’s name from the Bible involves a long-standing tradition of the Jews. Many of them hold that God’s name should never be pronounced. This belief is evidently based on a misapplication of a Bible law that states: “You must not take up the name of Jehovah your God in a worthless way, for Jehovah will not leave the one unpunished who takes up his name in a worthless way” (Exodus 20:7).

This law forbids the misuse of God’s name. But does it forbid the respectful use of his name? Not at all. The writers of the Hebrew Bible (the “Old Testament”) were all faithful men who lived by the Law that God gave to the ancient Israelites. Yet, they made frequent use of God’s name. For instance, they included it in many psalms that were sung out loud by crowds of worshipers. Jehovah God even instructed his worshipers to call upon his name, and faithful ones obeyed (Joel 2:32; Acts 2:21). Hence, Christians today do not hesitate to use God’s name respectfully, as Jesus surely did (John 17:26).

In replacing God’s name with titles, Bible translators make a serious mistake. They make God seem remote and impersonal, whereas the Bible urges humans to cultivate “intimacy with Jehovah” (Psalm 25:14). Think of an intimate friend of yours. How close would you really be if you never learned your friend’s name? Similarly, when people are kept in ignorance about God’s name, Jehovah, how can they become truly close to God?

However, many Bible translators have felt that the divine name should be restored when they translate.

Below are some examples of English translations that have used God’s name:

Recently, the 2004 edition of the popular New Living Translation made this comment in its preface under the heading “The Rendering of Divine Names”: “We have generally rendered the tetragrammaton (YHWH) consistently as ‘the LORD,’ utilizing a form with small capitals that is common among English translations. This will distinguish it from the name ′adonai, which we render ‘Lord.’” Then when commenting on the New Testament, it says: “The Greek word kurios is consistently translated ‘Lord,’ except that it is translated ‘LORD’ wherever the New  Testament text explicitly quotes from the Old Testament, and the text there has it in small capitals.” The translators of this Bible therefore acknowledge that the Tetragrammaton (YHWH) should be represented in these New Testament quotes.

Interestingly, under the heading “Tetragrammaton in the New Testament,” The Anchor Bible Dictionary makes this comment: “There is some evidence that the Tetragrammaton, the Divine Name, Yahweh, appeared in some or all of the O[ld] T[estament] quotations in the N[ew] T[estament] when the NT documents were first penned.” And scholar George Howard says: “Since the Tetragram was still written in the copies of the Greek Bible [the Septuagint] which made up the Scriptures of the early church, it is reasonable to believe that the N[ew] T[estament] writers, when quoting from Scripture, preserved the Tetragram within the biblical text.”

Would it not be heart-warming to know something about our Grand Creator? God urges us to draw close to him and he will draw close to us as well (James 4:8). And how do we draw close to a person? What is the first step we do when we want to get to know more about a person? Knowing his name, isn’t it? Knowing Jehovah’s name does not only offer us a close, intimate relationship with out maker, but it also offers us something more than life itself. That will be the topic of one of my future posts.

If you have more time in you hands and if you have your own copy of the Bible, please read the following verses about God and his name:

All biblical citations, unless otherwise indicated, are taken from the New World Translation of the Holy Scriptures.

4 thoughts on “Does God Have a Name?”

Tell Me Your Thoughts About What You've Just Read Cancel reply