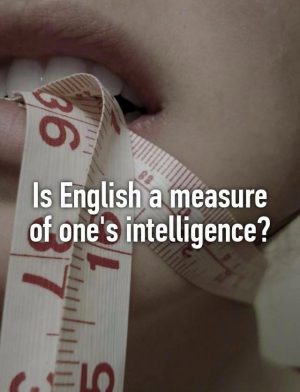 Is English a measure of intelligence? This has been an ongoing debate between different groups of people. Many believe that English—or speaking English well—is a measure of one’s intelligence. There are several blogs around the web that discuss this matter, most of which, if not all are baseless opinions. The most common mindset is this: people who speak terrible English are labelled as stupid and people who speak English well are revered as intellectuals. This notion is stupid, yes. At the same time, saying that English proficiency is not a measure of intelligence is highly debatable. How so? That depends on how we define intelligence.

Before we go into the details of this argument, let me give you some context about myself, especially for those who do not know me outside my blog. I am a graduate of Bachelor of Arts in English from one of the country’s state universities, which was awarded as the region’s center of excellence for education. Modesty aside, I graduated with the silver medal for academic excellence. I am a linguistics and literature major and worked with TESL for seven years before I became an editor and publicist for one of USA’s top publishing company for two and a half years. I have also been a freelance academic and creative writer for years, and have been delivering outstanding results for my employer and clients both. Currently, I am a communications trainer for one of the country’s best, if not the best, contact centers and BPO. I have met so many intelligent people whose English proficiency needed improvement, and I have helped them improve their communication skills and, apparently, become more successful in their field.

Now, let’s go back to the topic at hand—is English proficiency a measure of intelligence? First, let’s define intelligence. According to Merriam-Webster, intelligence is “the ability to learn or understand or to deal with new or trying situations” or “the ability to apply knowledge to manipulate one’s environment or to think abstractly as measured by objective criteria (as tests).”[1] Simply put, it is our ability to acquire and apply knowledge and skills. In psychology, human intelligence is defined as “the intellectual capacity of humans, which is characterized by perception, consciousness, self-awareness, and volition. Through their intelligence, humans possess the cognitive abilities to learn, form concepts, understand, apply logic, and reason, including the capacities to recognize patterns, comprehend ideas, plan, solve problems, make decisions, retain information, and use language to communicate.”[2]

And how do we measure intelligence? There are different ways to measure such. One is through measuring one’s intelligence quotient or IQ, which are one’s cognitive abilities relative to what others of different ages are able to do. This concept was introduced in 1904 by Alfred Binet.[3] To calculate a person’s IQ score, one’s mental age is divided by his or her chronological age, and the quotient is multiplied by 100. Another form of measure is he g factor (also called general intelligence, general mental ability, or general intelligence factor), which is a construct developed in psychometric investigations of cognitive abilities and human intelligence.[4] This is measured differently as well, and let us not go into that for now. But is this all there is to intelligence and where does English proficiency come into the picture?

According to Dr. Howard Gardner, intelligence is “a biopsychological potential to process information that can be activated in a cultural setting to solve problems or create products that are of value in a culture.”[5] He believes that the traditional notion of intelligence, which is based on IQ testing, is far too limited. Instead, he proposes eight different intelligences to account for a broader range of human potential for both children and adults. (You can read more about his Theory of Multiple Intelligences here.) One of the modalities of the eight intelligences that he proposes is the verbal-linguistic intelligence, or being word smart.

This modality of intelligence has high facility with words and languages. People who have this intelligence are naturally adept at reading, writing, telling stories, and memorizing words along with dates.[6] And this is where English proficiency comes in. Verbal-linguistics intelligence is measured through different verbal fluency tests or, simply put, one’s language proficiency or one’s ability to learn a new language. Therefore, one’s proficiency in English is, technically, a measure of an intelligence. It is ignorant to claim that a person’s ability to learn a new language, memorize rules of grammar and apply them consistently, learn new words and use them easily, and pronounce foreign words correctly and easily is not a measure of intelligence. This does not just apply to the English language, but any language at all (at the same time, English proficiency has always been the main point of discussion about this matter since several countries promote English as the international language that bridges the gap between languages). It is the same way that a person’s ability to socialize harmoniously with co-workers is both a sign and a measure of intelligence.

What does it mean for us second-language speakers of English? Dr. Gardner’s theory of multiple intelligences is also used to profile people based on what they are good at. It has been established that intelligence is significantly correlated with successful training and performance outcomes, and IQ/g is the single best predictor of successful job performance.[7] Certain employers use this as a decisive factor to sift through a list of applicants for a specific job. For example, my job as a communications trainer requires me and my colleagues to be adept at languages, whether it is semantics, syntax, morphology, phonetics, or other aspects of linguistics. It does not have to be a very technical knowledge of the language, per se. At the same time, we are expected to be masters of basic language rules, such as the difference between once and one’s, which verb tense is the most appropriate in a given context, or when to use the definite article in a sentence.

We Filipinos have been anchored in such an awkward mentality that we only measure intelligence in a specific way—mostly through the numbers we see in report cards, not what we are capable of doing in real life through different media. Because we are second-language speakers of English, we tend to be aggressively defensive that our ability or inability to speak the language is not a measure of our intelligence, when it actually is in some ways. We need to be more open-minded that intelligence comes in different forms and they are measured differently.

5 thoughts on “Is English a Measure of Intelligence?”